This is the thinking guiding one of China’s most ambitious projects — a plan to build a “smart” city for 500,000 people, from scratch, on four man-made islands in South-East Asia.

The $40 billion project is the vision of Yeung Kwok Keung, chairman of private Chinese development company Country Garden, who wants to build a city of skyscrapers atop three subterranean levels of roads and parking. A computer-generated image of what Forest City will look like from above upon completion in 2035.

“The public would not see any vehicles on the road as [the] city would be filled with greenery on the top layer while underneath is for roads and parking,” Yeung says.

But the project, dubbed “Forest City”, is not short of controversy. It is being built in the Strait of Johor, between Singapore and Malaysia — a region where vast amounts of housing are rapidly hitting the local market — and critics say there is no demand for a project of this size. Forest City is a $40bn Chinese development project underway to create a “futuristic” city for 500,000 people.

Country Garden has countered these claims by pointing out that their aim is to attract buyers from all around the world, who will be drawn to the opportunity to live in a futuristic city of 300,000 homes, the likes of which has never been seen before.

Forest City will include sky gardens, a duty-free zone, man-made lakes and beaches, commercial buildings, schools, medical facilities and even its own water supply.

“Our philosophy is that we will create the market, and the customers will arrive,” Yeung says. The city will have no cars on ground level.

At the development’s Singapore launch, Country Garden CEO Mo Bin added that the company sees Forest City as a model for cities of the future — one they hope to spread around the world. 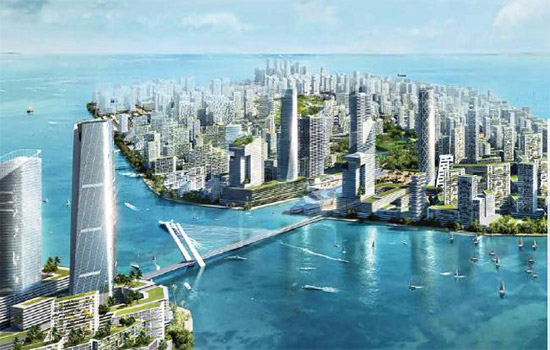 Forest City will consist of four man-made islands in the strait separating Singapore and Malaysia.

He says Country Garden’s successes in China have given it a considerable pool of capital to use as a platform for entering housing markets around the world — including Australia, where the company is already active.

Forest City will be completed in 2035.